Since lion dance is a culture of Chinese and developed since from ancient China, it can be divided in northern type (北狮) and southern type (南狮). 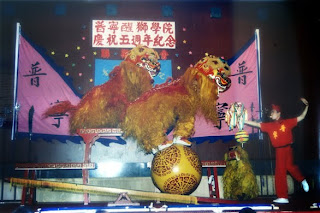 To do the lion dance, you definite need to went through the basic foot job steps of Kung Fu training, usually is the ‘ma bu’ (马步), because this is the most important basic requirement in doing lion dance yet follow by how good you coordinate with your partner. In advance Kung Fu foot job steps training, we need to do our basic step posing on top of the wooden poles (木桩)with about the palm size thickness which start from the height about 1 foot height, and these poles were called Mei Hua Zhuang (梅花桩). 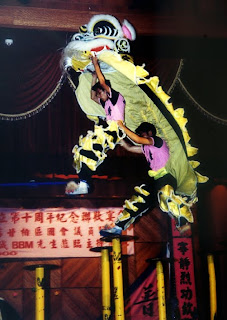 In higher level, these Mei Hua Zhuang (梅花桩) poles could be in about 5 foots to about 12 foots!

Since lion dance is Chinese martial art with performance criteria, doing lion dance on the wooden poles (nowadays all of us was using metal based poles) is a very interesting art. 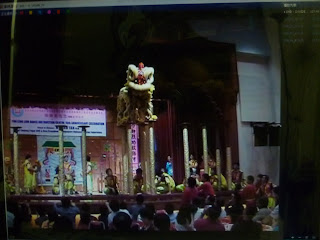 Posted by Pho Leng Lion Dance at 12:37 AM No comments:

Lion Dance is traditional Chinese Cultural. It was commonly seen in Chinese New Years and various opening ceremony, the welcoming ceremony of important VIP in the events and more. 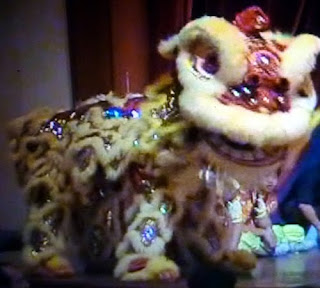 Due the Kung Fu movie had been became popular in the world, everyone know what is lion dance and especially Chinese sure commonly seen it a lot in ‘Wong Fei Hong’(黄飞鸿) film.

I think the more impressive version for the younger generation, should be the ‘Wong Fei Hong’ film which act by Jet Li (李连杰) and the film named “Once Upon China”, which this film in Chinese named “黄飞鸿”, using the name of one of famous Chinese Kung Fu Master directly.
Posted by Pho Leng Lion Dance at 10:42 PM No comments:

顾名思义，夜光龙即是在夜里发光的舞龙表演。
无论大小型节目皆老少喜爱的特别项目。
Luminous Dragon Dance is a unique dance performance which is the dragon body having bright luminous effect during night time dark performance. Whether it is small size or big event, is a great night events for all type of audiences. 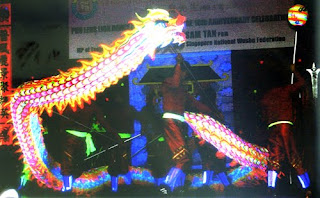 Posted by Pho Leng Lion Dance at 9:26 PM No comments:

Acrobatics is one of the popular item in many events like dinner and dance, family days, private functions like birthday parties, and especially in Chinese theme events like Chinese New Year, ‘Shanghai Theme’ event, Cultural theme events. 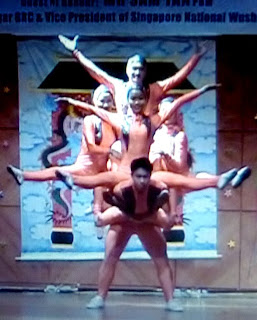 Talking about acrobatics, the acrobatic performer must have the Chinese Kung Fu training background like the legs split, backward stands, upside down by using hand stands and etc… 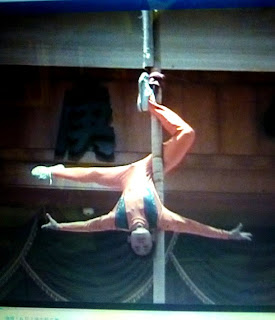 Why people like to see acrobatics performance? Because most people like to watch how the performer does the dangerous or stunning actions without and hurts; the effect could be same as watching magician doing some dangerous magic. 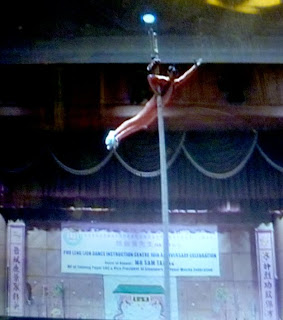 Posted by Pho Leng Lion Dance at 1:46 AM No comments:

I you had seen Bruce Lee's movie, you definitely seen his trademarked stunning chained stick weapon. This triple sticks chained with metals, which is called "三节棍"。 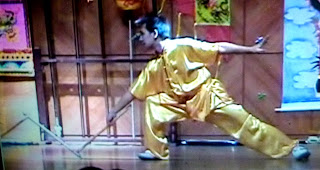 In Japanese martial art also having such weapon as well and it usually in double sticks and named "Nunchaku".
Double chained stick "双节棍" or "两节棍"(or triple chained stick, "三节棍") in traditional Chinese martial usually was much longer at what you seen in Bruce Lee movie.
Posted by Pho Leng Lion Dance at 2:48 AM No comments:

Drum or percussion are one of the common items hired by event organisers. Chinese drum is one if the common hired for production launching, opening ceremony other than lion dancing. The drums we use were same as what we use for Chinese lion dance. Usually the performer for such event will be 5 drummers to 7 drummers or more, it depends how big of the event.

Posted by Pho Leng Lion Dance at 2:17 PM No comments:

Stilt Walker is someone who uses a special made wooden stick tight on his / her foot and then walks on the crowd to increase the event’s entertaining value and atmosphere. 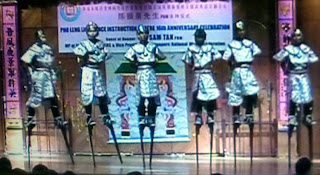 We had commonly see stilt walker worn some theme related costume and walk in the related area to woo the crowd, I guess we may not know what a professional stilt walker can do other than just doing their ‘cat walk’ in the crowd.

Look! They can do something different! 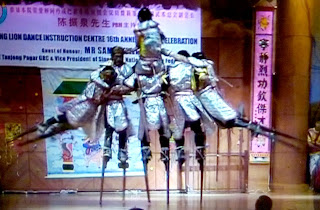 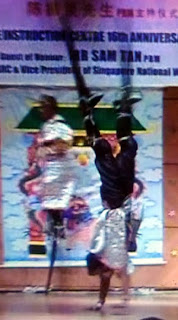 Posted by Pho Leng Lion Dance at 1:32 AM No comments:

I felt great that our lion dance and wushu school (chinsee martial art) also having some students from many countries. 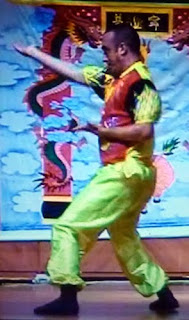 Posted by Pho Leng Lion Dance at 4:17 AM No comments:

Lion Dance definitely is an art that involve physical stamina, the coordination skill with your partner in the lion dance movement, the choreography design of the lion dance and etc.

Posted by Pho Leng Lion Dance at 3:58 AM No comments:

Lion Dance is one of traditional Chinese custom that commonly use during Chinese New Yearin China, Taiwan, Hong Kong, Singapore and Malaysia.

Other than Chinese New Year event, you can see Lion Dance performance during product launching and various events in country. 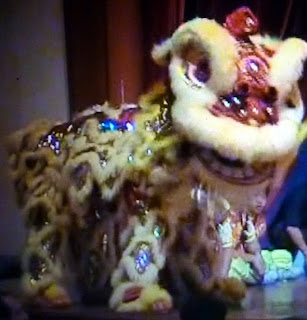 Posted by Pho Leng Lion Dance at 3:14 AM No comments: