Chinese Wealth God or God of Fortune (财神）is one of the highly demand 'Mingling Artiste" during the Lunar New Year period. It is forever one of the most popular items that is requested by our clients to usher good luck and prosperity. 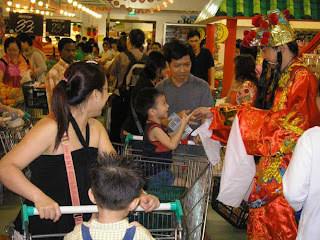 You can easily witness the Chinese Wealth God roving around shopping malls during this auspicious period of the year. 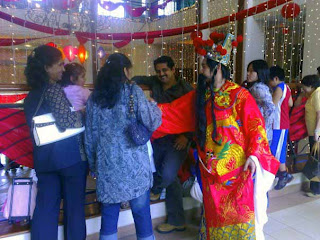 Posted by Pho Leng Lion Dance at 2:17 AM No comments:

It was a great pleasure that I have the chance to host in various getais (歌台) and events.

One of the most exciting encounter is that I am able to meet different talents from all walks of life.
I met 王雷 Ong Lei while Hosting for Long Quan Sports Association's 11th Anniversary Celebration held on 2 Jan 2010! 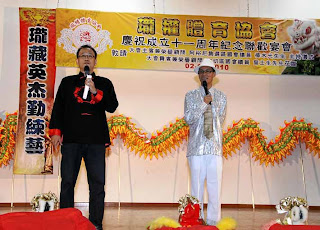 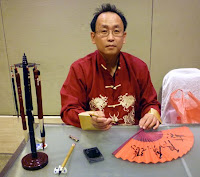 Calligraphy on Chinese fan is one of the popular event items for Company's Dinner and Dance, Corporate Events, Cultural Events and Especially the Lunar New Year that is around the corner.. 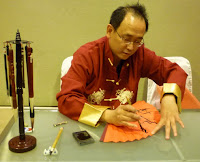 Whenever I was engaged by event companies for pre-dinner activites, my most pleasure moment is meeting my fellow pre-dinner events comrades who are being hired for the same show. One of my comrades is the renowned Mr Welles Tan the one and only caricaturist in Singapore who is capable of using both his left and right hand when sketching. Mr Welles is able to sketch 2 different characters using both his hands at the same time. Where to find such genius in the universe?? 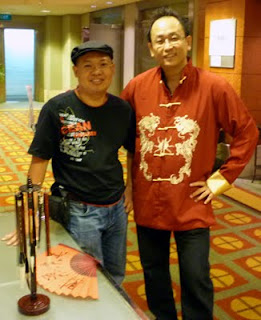 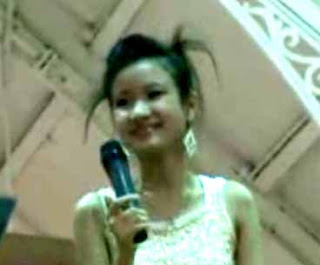 Posted by Pho Leng Lion Dance at 10:04 PM No comments:

Some Special Green in Lion Dance

The setting of the ‘Green’ (青) in Lion Dance performance have many types and patterns, for related opening ceremony or Chinese New Year, the ‘Green’ (青) for Chinese restaurant was commonly set in ‘Crab Green’ --蟹青, which related to their business (Crab is one of the popular Chinese Cuisine). 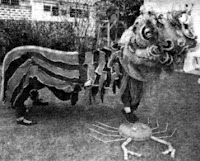 For Supermarket wise, we use “Five Luck Coming to You” (五福临门), for rice merchandiser or warehouse companies which not welcoming the rats that always spoilt their good stocks, we usually using “Snake Green” (蛇青) because rats always scared snakes.

There are lot more unique Greens in lion dance performance which you should be seldom seen them.

This is ‘Cheers with the Deity’ (八仙敬酒) 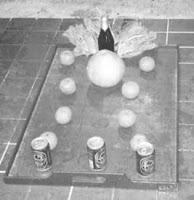 Encounter the Hero under the Moon (月下访英雄) 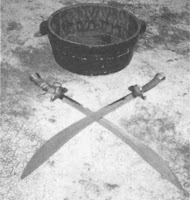 Posted by Pho Leng Lion Dance at 3:06 PM No comments:

Chinese pottery chair is one of the prop.

The even more advance level: Using combinations of different props!

Posted by Pho Leng Lion Dance at 10:32 PM No comments:

To make the performance of plucking the green in lion dance much more interesting, the ‘Green’ (or the “food” for the lion) had been designed in various formations. The design of the ‘Green’s formation is also used to test the skills of the lion dancers. There were many type of ‘Green’ Formations and given in many different names.
"五福临门青"(Five Prosperity Green)is one of the common Green formations in various commercial events. 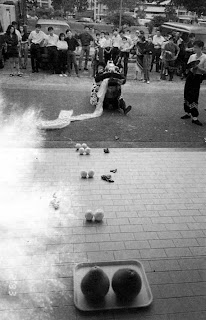 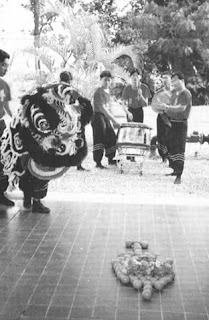 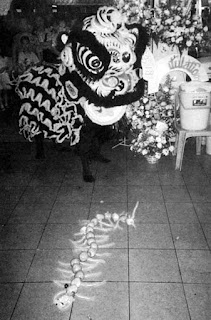 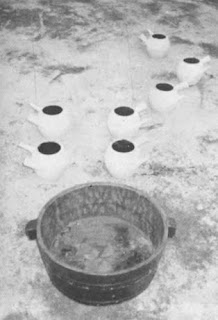 Posted by Pho Leng Lion Dance at 3:54 PM No comments:

Usually, after the lion dance performance for either Chinese New Year or opening ceremony, the related party will pay us the fees, other than events booking.

In traditional and standard lion dance way, the payment will put in the Chinese Red package (红包袋) and tie with green vegetables and then put them on the floor or hang them on bamboo . 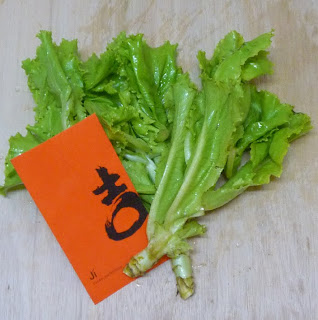 All of us see this ‘Lion’ as a live animal; hence we let it ‘eat’ its ‘food’ in an animal’s habit, which was the reason. 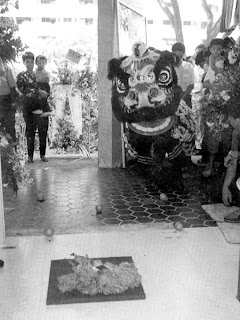 At the end of the performance, the lion will ‘eat’ it ‘food’, the name given of this ‘food’ is called “青” in Chinese Character, in English is called “Green” while we translate directly.

In pure stage lion dance performances we may not see the lion do any ‘food eating action’, but it will happen commonly during Chinese New Year events and Opening Ceremony.

The ‘food eating action’ in lion dance performance in Chinese word is called “采青”, means “Plucking the Green”, we believe this will bring lucks to everyone especially the related parties.
Posted by Pho Leng Lion Dance at 9:35 PM No comments:

When mentioning about the Lunar New Year, the older generation will recalled fire crackers. I mentioned the word ‘recalled’ as real fire crackers are no longer allowed to sparkle off in Singapore. This banned have not been lifted since it was spelled out many years ago.

Last year, the government had lifted the banned and allow real fire crackers to glitter in some major events, but strict rules and regulation have to be adhere to and approval of consent must be seek from the relevant authority.

Thus, Electronic Fire Crackers have become the substitute for real fire cracker to twinkle during the Lunar New Year or any other auspicious ocassions.
Posted by Pho Leng Lion Dance at 12:15 AM No comments:

Getai show is one of the unique events in Singapore. It usually sparks off during the Chinese Ghost Festival (or the 7th month of the Lunar calandar). The dying Getai came into life (all thanks to our Singapore's renowned film director Mr Royston Tan) after the Singapore movie ‘881’ which describe singers and related performers in Getai shows.
Our host,Li Pei Fen 李佩芬(Singapore's best female singer 2009, great singer who sings 8 languages, host) and Comedian Han Xing. 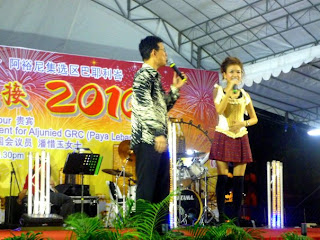 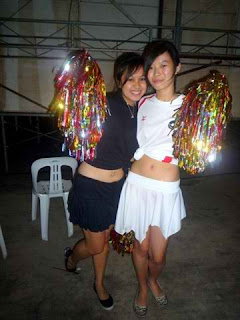 Cold fireworks adds as an extra ambience for the countdown. 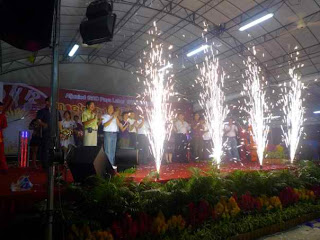 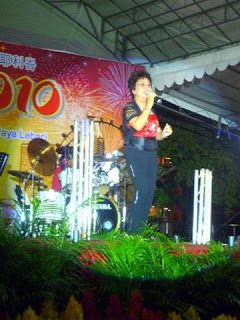 Another Emcee for the night! 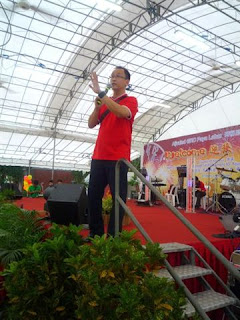 Posted by Pho Leng Lion Dance at 1:55 AM No comments:

In carnival type of events, lion dancing performance will be walk together with wealth god and big head doll. Big head doll which is a lion dance member that worn a big head mask with a smiling face that holding a Chinese fan and playing a role that like a clown to create some atmosphere in the event. 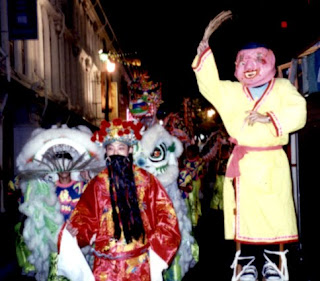 Posted by Pho Leng Lion Dance at 12:30 AM No comments:

Wealth God is one of the god that believed can bring the family good luck and wealth, hence it play the very important role in every heart of Chinese. 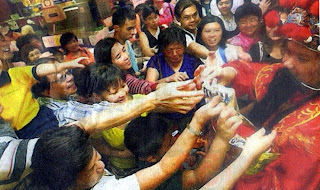 Posted by Pho Leng Lion Dance at 10:47 PM No comments:

Time fly as arrow, today is first day of 2010!
After yesterday’s celebration, you can found that the decoration of the street and shopping centers are changing to Chinese New Year themes, many shops was selling Chinese New Year stuffs. 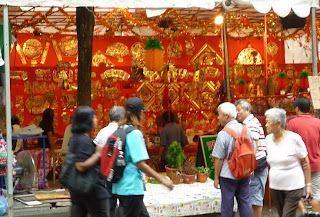 Talking about Chinese New Year, for those in the Chinese Cultural related industries, which providing lion dance, dragon dance and related entertainment and merchandise will be having the busies period starting from this month January and February. 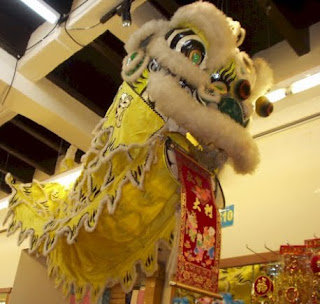 Posted by Pho Leng Lion Dance at 1:24 PM No comments: